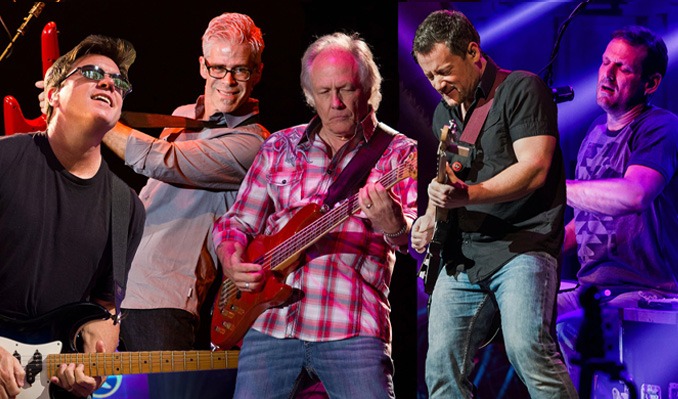 The Eagles founding member, the late Glenn Frey, knew what he was saying when he dubbed Little River Band “the best singing band in the world.” Through the ‘70s and ‘80s, LRB enjoyed huge chart success with multiplatinum albums and chart topping hits like: “Reminiscing,” “Cool Change,” “Lonesome Loser,” “The Night Owls,” “Take It Easy On Me,” “Help Is on Its Way,” “Happy Anniversary,” “We Two,” “Man On Your Mind,” “The Other Guy” and “It’s A Long Way There.”

Worldwide album, CD sales and digital downloads now top 35 million and LRB has set a record for having had Top 10 hits for 6 consecutive years - In fact, they were the very first band to achieve that remarkable status! According to BMI, “Reminiscing” has garnered rare status with over 5 million airplays on American radio, and “Lady” is close behind with over 4 million airplays.

Bassist/vocalist Wayne Nelson joined the band in 1980, and worked alongside founding members with some of the most distinctive harmonies and vocal abilities, creating the unique LRB sound. In 1981, Nelson was recognized by world renowned Beatles producer Sir George Martin whom, while producing ‘Time Exposure’, chose Nelson to record lead vocals on two of the band’s biggest hits, “The Night Owls” and “Take It Easy On Me.” Later that same year guitarist extraordinaire Stephen Housden joined LRB bringing a rock element into the band’s sound and helped contribute to their string of Top 10 hits. As band members departed, both Housden and Nelson worked together to bring LRB into the new millennium.

In 2004 LRB was inducted into the Australian Recording Industry Association Hall of Fame at the 18th Annual ARIA Music Awards and in September 2015 the band was awarded Casino Entertainer of the Year at the G2E Gaming Expo in Las Vegas Nevada.

Turning the page brings us to the current lineup of Little River Band… Keyboardist Chris Marion is a Dove Award winning producer. Chris is the creator of all the orchestral arrangements and charts on The Big Box. It is amazing to watch him play, sing, and conduct from his riser!

Drummer Ryan Ricks has locked down the rhythm section and rounds out the vocals with his incredible range. Great singing drummers are rare…and LRB is lucky to have Ryan as part of that all-important vocal blend.

Nashville Guitarist Colin Whinnery plays lead guitar, and shares lead vocal duties with Wayne. He continues to deliver a unique voice and a fresh outlook to the lead section.

Nashville Singer-Songwriter and Guitarist Bruce Wallace plays rhythm guitar and adds a new layer to the vocal harmonies. The addition of Bruce to the line-up has added to the energy of the already highly energized LRB.

Early 2014 saw the release of Little River Band’s ‘Cuts Like a Diamond,’ on Frontiers Records. “What If You’re Wrong,” went to #1 and stayed there for 3 weeks says Jim Shoe of CLASSX Radio. “Forever You, Forever Me,” and “You Dream, I’ll Drive,” both climbed into the station’s TOP 3.

In November of 2016, LRB released, ‘The Hits…Revisited,’ on Wurld Records, a CD consisting of 9 re-recorded hits along with 2 new songs.

May of 2017 brought the release of ‘The Big Box’ - a box set consisting of 6 discs featuring a DVD with live footage from their 40th Anniversary Tour.

In November of 2020 during the Pandemic, and in partnership with TIME LIFE, the orchestral accompanied ear candy ‘BLACK TIE,’ was released to rave reviews.

Bringing their vocal and musical energy along with great arrangements to their timeless classic hits, each show creates new memories for the audience. The band enjoys watching their fans fall in love with the songs all over again as they are swept up by the show’s powerful performance and the volume of hits from LRB’s history.

Little River Band is hotter than ever selling out shows and making music coast to coast continuing their legacy of being “the best singing band in the world.”