The Monkees Celebrated by Micky Dolenz 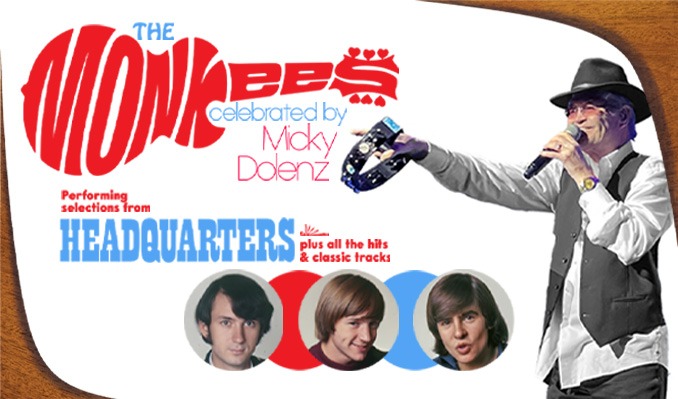 Rams Head Presents The Monkees Celebrated by Micky Dolenz at Maryland Hall Performing Selections from HEADQUARTERS Plus All The Hits and Classic Tracks!

Micky Dolenz was born in Los Angeles on March 8, 1945. Both of his parents had worked in entertainment; his father George starred in a number of films and as the title character in The Count of Monte Cristo (a mid-1950s syndicated television series).

Micky established himself as an entertainer at age ten under the stage name of “Mickey Braddock,” starring in commercials and his first TV series, Circus Boy (which aired on NBC and then ABC from 1956-1958). In his early teens, Micky guest-starred on a number of television shows including Peyton Place. At every step, Dolenz pursued an interest in singing and playing guitar. He began touring in 1957 to promote his television work and would often sing at state fairs and parades as a part of his duties. During his late teens, he recorded and performed with such combos as Micky & The 1-Knighters and the Missing Links.

In the fall of 1965, Micky was one of 400 applicants who responded to a trade ad that announced auditions for a new TV show about a rock band. He auditioned for The Monkees TV show by playing and singing Chuck Berry’s legendary rocker “Johnny B. Goode,” and wound up chosen for the show along with three other actor/musicians: Davy Jones, Michael Nesmith, and Peter Tork.

The Monkees' debut single, "Last Train to Clarksville," featuring Micky on lead vocals, hit the charts on September 10, 1966 and rocketed swiftly to #1. Two days later, The Monkees series debuted on NBC to immediate success. For two seasons, the program captured the minds of young people around the world and in 1967 garnered two Emmy awards for “Outstanding Comedy Series” and “Outstanding Directorial Achievement in Comedy.”

Micky and his fellow “TV bandmates” actually went on to become a real live rock band that first toured North America from late December 1966 to May 1967, and then began a US/UK summer 1967 tour that featured (at Micky’s invite, following the Monterey Pop Festival) none other than guitar legend Jimi Hendrix as the opening act for the first few dates. It was around this time that Micky also acquired one of the first Moog synthesizers, which he played on the Monkees’ fourth #1 album (Pisces, Aquarius, Capricorn & Jones, Ltd.), predating use of the instrument on a recording by any popular music artist.

The Monkees also went on to star in their own feature film, Head, a 1968 psychedelic romp directed by the TV series’ co-creator Bob Rafelson from a script co-written by a young Jack Nicholson. The movie is now considered a cult classic. Around the same time, The Monkees series climaxed with an episode written and directed by Micky (Mijacogeo a.k.a. The Frodis Caper). This work would set Micky up for another of his passions and would eventually blossom into his role as a successful television director via Great Britain’s BBC and London Weekend Television.

In 1977, Micky flew to London to star in the West End production of the musical The Point! written by his close friend, singer/songwriter Harry Nilsson. He planned to stay three months. Instead, he remained in England for twelve years working primarily behind the scenes. In addition to extensive direction and production of music videos and television programs, he helmed a short feature film, The Box, written by Michael Palin and Terry Jones of famed British comedy team Monty Python.

In the early 1980s, while in England, Dolenz also directed a stage version of the Alan Parker-directed 1976 feature film Bugsy Malone—the cast of which included a then-unknown 14-year-old Welsh actress named Catherine Zeta-Jones. From 1983 to 1984, he was also responsible for creating and producing the British children's television show Luna. But his directing days were curtailed by a new wave of Monkeemania created by MTV, who broadcast the original series in several marathon screenings. A whole new generation was exposed to the groundbreaking show and the public once again demanded a concert tour from the group. Micky even joined Monkees bandmate Peter Tork to record new single for Arista Records (“That Was Then, This Is Now”) which became the Monkees’ first Top 20 record since 1968.

At one point in 1987, there were seven Monkees’ albums on Billboard's Top 200 LPs chart. A series of concert tours and a new album by Dolenz, Jones & Tork (Pool It!) kept the Monkees’ flame burning. Although he resumed work as a director and actor between Monkees gigs, fan demand remained high for more reunions and recordings in the 1990’s and 2000’s (including a full album with Michael Nesmith – 1997’s Justus – and an ABC network TV special).

Ultimately, the Monkees achieved their greatest success not as a TV show but as viable recording artists, selling in excess of 65 million units and achieving worldwide success. Their first four albums—The Monkees (1966); More of The Monkees (1967); Headquarters (1967); and Pisces, Aquarius, Capricorn, & Jones, Ltd. (1967)—all reached the number-one position on the charts and launched three number-one singles: “Last Train to Clarksville,” “I’m a Believer” (both with lead vocals by Micky), and “Daydream Believer.” In all, the group scored fourteen Hot 100 albums and a dozen Top 40 hit singles.

With Micky’s powers as a live performer now hitting full stride, Dolenz hit the road with the National Touring Company of the stage musical, Grease. He enjoyed theater work so much that he went on to accept the lead role in a Canadian production of A Funny Thing Happened on the Way to the Forum in 1993. In 2004 he starred on Broadway in the Elton John/Tim Rice Broadway musical Aida, as the character of “Zoser.”

June 2006 saw Dolenz onstage again in the role of “King Charlemagne” at the Goodspeed Opera House for the revival of the musical Pippin in East Haddam, Connecticut. He also toured later that year in the role. In 2007, he appeared in Rob Zombie's bloody remake of Halloween as “Derek Allan,” the somewhat eccentric owner of a gun shop where Dr. Sam Loomis (played by British actor Malcolm McDowell) buys a gun in his search for the famously murderous Michael Myers. Micky also participated in the 2008–09 season of CMT's reality-TV music show Gone Country, competing against fellow celebrities Sheila E. (who eventually won), Taylor Dayne, George Clinton, and actor Richard Grieco.

Micky began 2010 with a comedic turn in London’s legendary West End performing in a production of the hit musical Hairspray (playing the character of “Wilbur Turnblad”). His solo album, King For A Day—a tribute to the songs of Carole King—was released by Gigatone Records on August 31, 2010, which was followed by another Monkees reunion tour (their first in a decade).

Traveling Britain and the United States with Davy Jones and Peter Tork, the group garnered some of their best reviews ever—including an especially fine assessment of the band’s musical abilities from Rolling Stone. The press notices on Dolenz were particularly impressive, with the Huffington Post’s review comparing Micky’s voice to “a brilliant cross between Roy Orbison and Freddie Mercury.” Sadly, this was to be Davy Jones’ last tour; he passed away from a heart attack in February 2012.

Jones’ passing left Micky in a contemplative mood and during this time he created what many consider to be his finest solo effort, Remember (Robo Records/Universal), which would be released that September. In November, Micky regrouped with Peter Tork and Michael Nesmith to honor Davy with a dozen concerts in the fall of 2012. Pollstar, the concert tour industry’s leading trade publication, placed it in its Top 20 grossing concert tours in 2012.

In January 2013, Dolenz embarked on a two-week series of performances in Hairspray to honor the 25th anniversary of the film written and directed by John Waters (who himself portrayed the Narrator during the performances). A summer tour with Peter Tork and Michael Nesmith further cemented the Monkees’ legacy. Back home, Micky founded a fine-furniture company with his daughter, Georgia, called Dolenz & Daughters (www.DolenzandDaughters.com).

In 2016, Micky marked the 50th anniversary of the Monkees’ debut with a new album (Good Times!) and tour. Produced by the late Adam Schlesinger (of Fountains Of Wayne), the album became the Monkees’ first Top 20 album since 1968. Good Times! drew rave reviews and spun off such popular singles as “Me And Magdalena” (written by Death Cab For Cutie’s Ben Gibbard) and “She Makes Me Laugh” (composed by Rivers Cuomo of Weezer). This success beckoned follow-up albums Christmas Party (2018) and The Monkees Live: The Mike & Micky Show (which became the band’s final charting album in 2019).

In September of 2021, Dolenz and Michael Nesmith embarked on the 46-date “Monkees Farewell Tour.” Capped off on November 14 at Los Angeles’ Greek Theatre, the show would be Michael Nesmith’s final stage performance. Fittingly, Dolenz had paid proper musical tribute to his friend and musical hero on an album recorded for England’s 7A Records, Dolenz Sings Nesmith. Produced by Michael’s son, Christian Nesmith, the project brilliantly reimagined thirteen Nesmith-penned selections. One track, a remake of Nesmith’s most successful composition, “Different Drum” flew to the #1 spot on the UK’s Heritage Chart.

In the spring of 2023, Dolenz will celebrate a new box set based around the Monkees’ third #1 album, Headquarters.