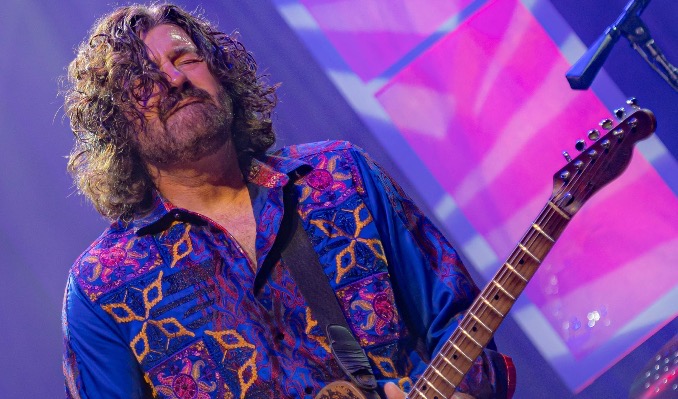 Tab Benoit live at the Key West Theater located in the heart of Old Town. This intimate venue features state of the art sound, a full bar and seated cocktail service. **THIS IS A FULL CAPACITY PERFORMANCE** For questions, email boxoffice@thekeywesttheater.com.

In 1992 Benoit released his first recording Nice and Warm on the Justice Label. The title track became a AAA Radio hit and Benoit’s touring career kicked into high gear. Nice and Warm prompted comparisons to blues guitar heavyweights like Albert King, Albert Collins and even Jimi Hendrix. Tab began playing two-hundred and fifty shows a year, a schedule he has kept up for over twenty years. He recorded four albums for Justice Records before being signed to the Vanguard label, and became Louisiana’s Number One Blues export. Vanguard allowed Tab to produce his own recordings; Tab wanted to record the sound that he was trying to create and in 1999 Vanguard Records released These Blues Are All Mine. Tab Benoit’s music evolved again after he signed with the Telarc International/Concord Music Group in 2002. He began to strip it down to a three-piece group, where he found more freedom as a guitarist. He was also on a mission in wanting to use his music and his energy to bring attention to Louisiana’s coastal erosion issues. Tab began to spend more time in the Wetlands and it was where he began to write his songs. Wetlands was the title of his first Telac/Concord International release. The record combined many musical styles that are indigenous to Louisiana, while he began to play accordion lines and washboard on guitar. Wetlands was a mile marker that definitively marked Tab’s further musical progression into his own original sound and style. Following the release of Wetlands in 2004 Benoit founded the Voice of the Wetlands non-profit organization and began to use music and gather other musicians to use their platforms for getting the message out. He put together an all-star band that featured Cyril Neville, Anders Osborne, George Porter Jr, Big Chief Monk Boudreaux, Johnny Vidacovich, Johnny Sansone, and Waylon Thibodeaux that became The Voice of the Wetlands All-Stars. The Voice of the Wetlands All-Stars have released two CDs and occasionally tour throughout the country. Benoit recently launched his own imprint, Whiskey Bayou Records, with partner and manager, Rueben Williams. The label has thus far released albums by such established artists as Eric McFadden, Damon Fowler, Eric Johanson, Jeff McCarty, and Dash Rip Rock. In 2019 Benoit hits the road for a major U.S. Tour, the Whiskey Bayou Revue, featuring Benoit and several of his label’s artists.
Read More

Official WebsiteTwitterFacebook
*Service and handling fees are added to the price of each ticket.
Buy Tickets