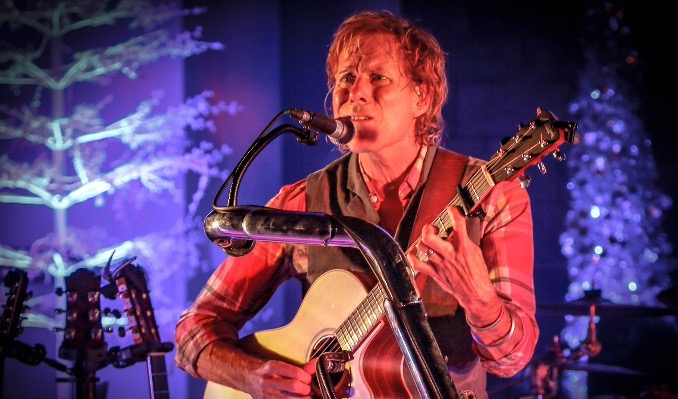 Peter Mayer live at the Key West Theater located in the heart of downtown just blocks from Duval Street. Doors at 7PM, Show at 8PM. The Key West Theater offers seated cocktail service with a full bar. **THIS IS A FULL CAPACITY PERFORMANCE** Peter Mayer, singer, songwriter and guitarist is set to embark on the 22nd anniversary of his widely acclaimed Christmas tour “Stars and Promises.” Mayer has released 25 of his own albums, toured internationally with his own band, and has been lead guitarist for Jimmy Buffett’s Coral Reefer band for three decades. In 1999, Peter and his brother, Jim Mayer, began work on their first Christmas album, “Stars and Promises.” They recorded favorite traditional carols along with their own original Christmas songs that, over the years have become favorites of their audiences across the country. Since that first recording and tour in 1999, Mayer has released four additional Christmas albums and this year celebrates his 22nd year on the road with his world-class seven-piece band. The “Stars and Promises” concerts are engaging in live performance and made memorable with state-of-the-art sound and production. “Stars and Promises” brings its unique yuletide tradition to thousands of fans who have called this production, “a Christmas show like no other!” https://www.youtube.com/watch?v=cRsImcsUxjM&feature=emb_title

Peter Mayer is a guitarist, vocalist, songwriter, touring musician and recording artist in Nashville, Tennessee. With his unique writing style, distinctive voice and virtuoso musicianship, Mayer creates compelling and soulful music for an electrifying live performance. Mayer has released 25 albums to date and tours year round with the Peter Mayer Group. He is the lead guitarist in Jimmy Buffett’s Coral Reefer Band and has shared the stage with a regalia of bright lights in the music industry including: James Taylor, Paul McCartney, Ringo Starr, Don Henley, Dave Matthews, Joe Walsh, and many others. As a young child in Tamilnadu India (where his parents were Lutheran Missionaries), Peter Mayer had a passion for music. Drawing on musical influences from his eastern and western upbringing, Mayer’s music freely travels over diverse harmonic, melodic and lyrical roads from The Beatles, rock ’n roll, church hymns, classical music, pop, and his years of studying jazz guitar. After moving back to the United States, he went on to study formal theory and composition and taught jazz guitar as a faculty member at Webster University. In 1988, Mayer released his debut album for Warner Brothers Records with the group PM. Working with producer Elliott Scheiner (Steely Dan, Aretha Franklin, Bruce Hornsby) – this album produced the single “Piece of Paradise,” charting to number eight on Billboard. Mayer began touring with Jimmy Buffett’s Coral Reefer band in 1988 as lead guitarist, a position that he holds to this day. He regularly tours with his own bands, including Peter Mayer Group, Peter Mayer’s Songs of Faith, Peter & Brendan and Stars & Promises Christmas.
Read More
*Service and handling fees are added to the price of each ticket.
Buy Tickets