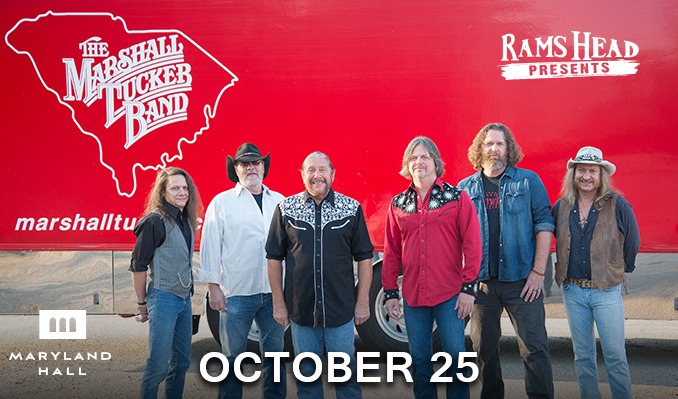 The Marshall Tucker Band came together as a young, hungry, and quite driven six-piece outfit in Spartanburg, South Carolina in 1972. The band’s mighty music catalogue, consisting of more than 20 studio albums and a score of live releases, has racked up multi-platinum album sales many times over in its wake. A typically rich MTB setlist is bubbling over with a healthy dose of indelible hits like the heartfelt singalong “Heard It in a Love Song,” the insistent pleading of “Can’t You See,” the testifying travelogue warning of “Fire on the Mountain,” the wanderlust gallop of “Long Hard Ride,” and the unquenchable yearning pitch of “Ramblin’,” to name but a few.

“I’ve been in tune with how music can make you feel, right from when I was first in the crib,” observes lead vocalist and bandleader Doug Gray, who’s been fronting the MTB since the very beginning. “I was born with that. And I realized it early on, back when I was a little kid and my mom and dad encouraged me to get up there and sing whatever song came on the jukebox. It got to the point where people were listening to me more than what was on the jukebox! There’s a certain frequency I found I could share, whether I was in front of five people or 20,000 people. And once that frequency is there, everybody will listen.”

MySpaceOfficial Website
*Service and handling fees are added to the price of each ticket.
Buy Tickets