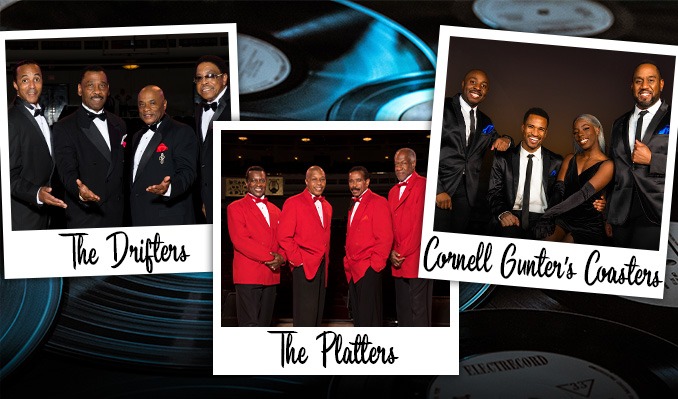 The Drifters are a doo-wop and R&B/soul vocal group that found fame in the 1950s and 1960s, notching six number-one Billboard R&B hits: “Money Honey,” “Honey Love,” “Adorable,” “There Goes My Baby,” “Save The Last Dance For Me,” and “Under The Boardwalk.”

Formed in 1952, The Platters one of the most successful vocal groups of the early rock and roll era. Their distinctive sound bridges the pre-rock Tin Pan Alley tradition and the new burgeoning genre. The group had 40 charting singles on the Billboard Hot 100 between 1955 and 1967, including four number-one hits. In 1990, the Platters were inducted into the Rock and Roll Hall of Fame.

The Coasters (now the Cornell Gunter Coasters, named after their founding member) are an R&B/Rock ‘N’ Roll vocal group who had a string of hits in the late 1950s. Although the Coasters originated outside of mainstream doo-wop, their records were so frequently imitated that they became an important part of the doo-wop legacy through the 1960s. In 1987, they were the first group inducted into the Rock and Roll Hall of Fame.

Thirty years ago the entertainment manager at the Tropicana Hotel in Atlantic City had what he thought was a very good idea. It was a time of Boy Bands, Hair Bands & Hip Hop. He decided that he was going to take 3 of the most popular touring bands from early Rock & Roll (the Drifters, Coasters & Platters) and combine them into a package that could compete with the major acts that frequently played in the Tropicana’s massive showroom. Cher played that very room in those days, as did Elton John and Santana.

The above, mentioned groups had already been touring, successfully, for many years. with an established fan base, but at basically midsized clubs throughout the country. “Synergy” said, Bobby Ross (the Tropicana’s fabled entertainment director). “These groups represent synergy – the whole is greater than the sum of its parts”. Place the 3 of them together and they represent the vast expanse that is the joy of early Rock & Roll.

The Drifters created the pre-Motown, heavily choreographed slickness, of Urban Pop-Soul. The Coasters (soon to become the Cornell Gunter Coasters – named after their founding member) were the premier, and perhaps the only, group combining gritty R&B with night club comedy antics. The Platters – well so much music, even then, was about love and romance (especially that of the young & unrequited variety) and that is what the Platters were all about.

The three-act package had played the country before, but Bobby Ross did something quite exceptional. He had their managers combine them into one, seamless show where their interplay put the focus on the big picture of the presentation rather than three separate concerts. And, most importantly, he booked them for an extended, six-week run.

“These groups are great alone”, Ross said at the time, “make sure we have a package where the three of them perform as one and make it a party – not a show.” Bobby noted the overwhelming numbers of Atlantic City visitors. “Word of mouth governs in this town. We’ll let some high-rollers in for free first, and if the show is what I think it will be by the second week it will be selling out.”

In a way, the very far-sighted and creative Bobby Ross was wrong. By the 4th night the show was selling out. And it continued to sell out. Not for just the original six-week run but for three, six-week run every year for the next five years.

And then, it was on to Las Vegas. Nine months per year in Vegas at the famed Sahara Hotel, where the Beatles and Sinatra got their starts, three months on the road (with just a few stops to kiss the family hello and good-by). Those were heady times for the three groups together. They went one to present the longest running concert show in Las Vegas history – under Producers Bill Caron and Larry Marshak (who has and still does manage several of the acts over the years).

Membership in the three groups has evolved over the years as time has passed but the Drifters, the Cornell Gunter Coasters and the Platters still stick with their original strategy of combining long term veterans with fresh new faces from time to time. So, even at this late date, after nearly fifty years as one of the top selling road shows in the country, half of the members from the three groups date back to having performed with original members on the original recordings.

In a two-page, centerpiece spread, in the Las Vegas Review-Journal’s weekend entertainment magazine, the Entertainment Editor noted, “this strategy of rotating veterans with rookies to form an on ongoing and cohesive line-up, has allowed the groups to make creative personnel changes over the years while still conforming to their original aura”. The senior most member of the three groups. Jerome Jackson, who worked with the Drifters going back to the days of Ben E. King (over thirty years ago) had this to say about the concept: “It works, we still get all of our old fans plus at each show we see a whole new fanbase of young people discovering our music for the first time. These groups have a tremendous historical legacy, which I am so proud to be a part of, and we aren’t doing anything to change it”, Jerome said, as he made his way to sign autographs for two teenage fans and their mother.