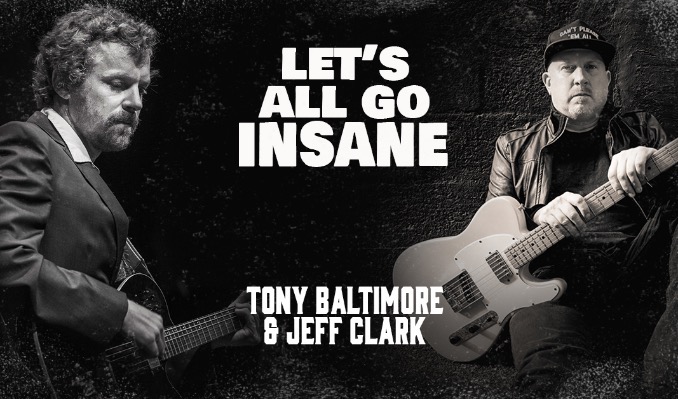 Ian Shaw produced “Let’s All Go Insane” for Conch Town Records. A music video for the title song, directed by Marky Pierson, is currently on YouTube at Let's All Go Insane - Tony Baltimore. To celebrate the CD release, Conch Town Records is presenting a concert starring CTR artists Tony Baltimore and Jeff Clark and featuring Turner Harrison on February 24, 2022, at the Key West Theater. Tickets may be purchased at thekeywesttheater.com

When Tony Baltimore came to live and perform music in Key West in 2010, he promised his friend Nick Doll he would try it for a year. Twelve years later, he is still here. Baltimore has become an integral part of the Key West music scene, and it seems like he has been here forever… Tony Durante began playing guitar at thirteen. He grew up in the Baltimore, Maryland vicinity—hence the nickname—and performed there as a lead singer and guitarist. “I was in a band in Baltimore called Skip Hop and Go Naked for many years, we played all throughout the mid-Atlantic area. Once it became evident that the band wasn't going to go as far as I would've liked and my ambitions were not being met I changed course and decided to go to graduate school to study poetry. Around mid 2010 I had a conversation with photographer and friend, Nick Doll, about moving to either Manhattan, London or Paris. He convinced me that I should move to Key West for ‘a year.’ Eleven or so years later I'm still here.” Key West provided fertile ground for Baltimore’s music. He began by playing solo gigs at Bogart’s. He continued to Island Dogs and The Lazy Gecko. Then he added Willie T’s. Augmenting his solo gigs with playing with other local musicians, he played a weekly gig with Caffeine Carl Wagoner. Next, he created the Beatle Band with Jeff Clark. It was time for a CD. “Define the Blur” 2016 “Originally Nick Norman and I were co-producing the record, with Derik Reay and Andrew Gunning on board as engineers. It turned out that Nick dropped off and the remaining three of us had a silly fun time recording together. I look back at those sessions very fondly. There was a great feeling of, ‘We can try anything we want to. Fuck it!’” “Hear Me In” 2019 “I wrote most of the songs on “Hear Me In” while I was recording DTB. This album was going to be completely different because I decided to work with British producer Ian Shaw. So there was a decidedly different approach, structure, and sound. But also, these songs were very much written to be together as a group. And I think that shows. I think Ian understands where I’m coming from musically and allows me to really open up and express my needs as a songwriter. Not that the other gents didn’t, but I really wanted to achieve something as a songwriter for ‘Hear Me In.’ And Ian was the obvious choice if that was going to happen.” “Let’s All Go Insane” 2022 “Over the past few years I’ve consciously and purposely changed my outlook on how I live my life… on how I choose to process information and relationships as well as who I want to be as a person. For example, ‘Take Care of Yourself & Someone Else,’ is more or less my motto currently. It’s what I say at the end of all of my shows, I just had merchandise made to promote that very thought and it is permeating through my very existence every day. I think that right there is the theme of this record. There are songs about loving life, traveling, coping with depression. There’s a song about not dealing with the bullshit of the government, and so on. I really feel that this record will be my best work to date.” “A silly song that I love called ‘Seaside Blues’ is on the record. I wrote the song during quarantine and I really feel like it captures the overall mood in Key West during such a strange time. The world had shut down, there were no tourists, the bars and restaurants were all closed– there was basically nothing to do but go back to simplicity. So I called Turner Harrison (one of my best friends) over one day and we just recorded it in my old apartment by the cemetery. I played guitars, drums, kazoo, sang, Turner played piano, bass, and sang. It really was a lovely time here in Key West, and probably the closest I’ll ever get to experiencing the island like it was in the 70’s.”
Read More
*Service and handling fees are added to the price of each ticket.
Buy Tickets