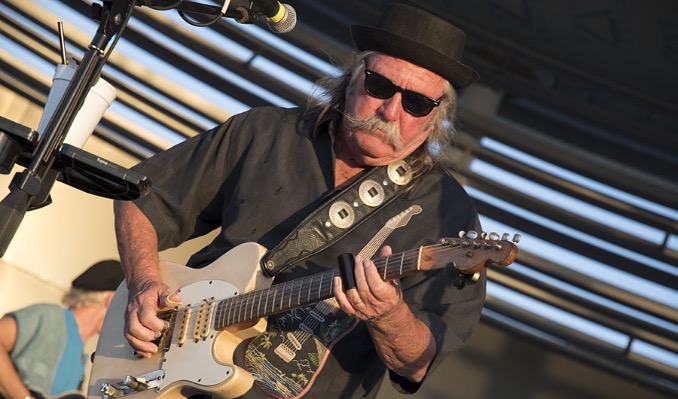 LEGENDARY BILL BLUE IN CONCERT FEBRUARY 4TH 2022 AT THE KEY WEST THEATER Last fall Bill Blue got some very bad news. He had large tumors on his voice box. It was too late for treatment. His voice box would have to be removed. “I will never sing again.” After a year of surgeries and follow-up treatments, including several rounds of radiation, Blue has been declared cancer free. And,  as a follow up to the Bill Blue Fundraiser at the Key West Amphitheater last spring, Conch Town Records is pleased to announce Bill Blue’s Sing Like Thunder Revue. The concert will feature Bill Blue playing the hits he wrote over the past forty years, with various friends as guest stars singing the lyrics.

Born in Aberdeen North Carolina and raised in Yorktown VA, Bill first picked up a guitar when he was at school in Richmond VA. Playing along with records at first, Bill began to develop his unique slide guitar technique. A chance meeting with Arthur (Big Boy) Crudup who wrote Elvis Presley’s hit ‘That’s Alright Mama’, ignited Bill’s life-long passion for Blues music. With the British music invasion of the 60’s and 70’s, bringing R&B bands like The Rolling Stones to the USA, interest in Blues music grew and Arthur Crudup who’d been working as a farm hand, asked Bill to put together a live band. Arthur and Bill toured the USA, most notably opening for Bonnie Raitt on her first American tour. After Arthur died in 1974, Bill went out on his own and for a decade toured extensively sharing the stage with BB King, ZZ Top, The Allman Brothers, Albert King, Johnny Winters, Hank Williams Jr and countless others at Blues festivals across the USA. Bill made 2 LPs for the Feather label before signing with the prestigious Adelphi record label, one of the best blues labels in the US. Bill made 2 LPs for Adelphi and the worldwide distribution the label offered gave him the chance to be heard around the world. Bill toured to promote his records in all the Scandinavian countries and in addition played in France, Estonia and Lithuania. Bill didn’t record anything new until 2013 when new Key West resident, British producer Ian Shaw persuaded him back into the studio. The resulting LP ‘Mojolation’ which is available for download here…. garnered stellar reviews, worldwide airplay and reached No.1 on ReverbNation’s Blues chart and on the British Blues Broadcaster’s chart. In honor of Bill’s new record, his charity work and being the ‘elder statesman’ of the Key West music scene. The City Of Key West declared October 13th to be Bill Blue Day in perpetuity. Bill was the first artist to sign with Conch Town Records for his album ‘King of Crazy Town’ released in 2020.
Read More
*Service and handling fees are added to the price of each ticket.
Buy Tickets