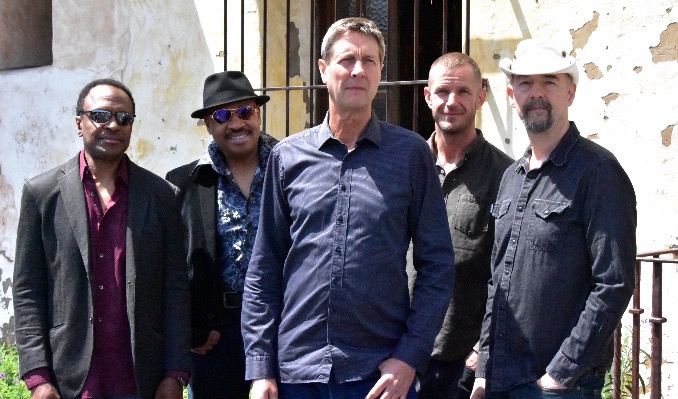 Live at the Key West Theater located in the heart of Old Town. This intimate venue features state of the art sound, a full bar and seated cocktail service. **THIS IS A FULL CAPACITY PERFORMANCE** For questions, email [email protected]

Known for their sophisticated instrumental sound, London's Acoustic Alchemy emerged in the 1980s playing a distinctive blend of jazz, classical, flamenco, and new age. Initially showcasing the talents of guitarists Nick Webb and Greg Carmichael, the duo gained a loyal following and chart success with albums like 1990's Grammy-nominated Reference Point, 1994's Against the Grain, and 1996's Arcanum. Since Webb's passing from cancer in 1998, Carmichael has led the group, issuing Top Ten Billboard jazz albums like 2000's The Beautiful Game, 2001's Grammy-nominated AArt, and 2011's Roseland. Formed in London in 1981, Acoustic Alchemy originally featured guitarist Nick Webb and nylon guitarist Simon James. Webb had studied jazz at Leeds College of Music, and both he and James issued two albums which also featured the string quartet the Violettes. The albums went largely unnoticed, and the two eventually parted ways. In 1985, Webb formed a second version of the band featuring Greg Carmichael, who had studied classical guitar at the London College of Music and led his own group. The duo initially found work for Virgin Airlines, providing in-flight music on trans-Atlantic trips. They sent a demo to MCA and were quickly signed to the label. In 1987, they made their MCA debut with Red Dust & Spanish Lace which included the track "Mr. Chow." Two more albums followed for the label, with 1988's Natural Elements (the title track became the theme song for the BBC TV show Gardeners' World) and 1989's Blue Chip. In 1990, the duo signed with GRP and issued their fourth full-length album, Reference Point. It earned them their first Grammy nomination for Best New Age Performance for the track "Caravan of Dreams." With their profile on the rise, the duo issued several more well-received albums including 1991's Back on the Case, 1993's The New Edge, and 1994's Against the Grain, the latter of which peaked at number six on the Billboard Jazz Albums chart. Arcanum followed two years later and garnered a Grammy nomination for Best New Age Album. Prior to the recording of the group's follow-up, 1998's Positive Thinking, Webb was diagnosed with pancreatic cancer. His conditioned worsened over the course of the recording process, and while he contributed songs and production insight, he was unable to perform on the album. He died prior to the album's release on February 5, 1998. In the wake of Webb's death, Carmichael signed with Higher Octave Music and unveiled a revamped Acoustic Alchemy that included longtime sidemen like bassist Frank Felix, guitarists John Parsons and Miles Gilderdale, keyboardist Terry Disley, and keyboardist Tony White. This version of the band debuted with 2000's The Beautiful Game, which reached number four on the Billboard Jazz Albums chart. AArt followed a year later, and landed them another Grammy nomination, this time for Best Pop Instrumental Album. Empowered by that success, the band continued to tour and record, issuing 2003's Radio Contact and 2005's American/English. Both albums further solidified the group's lineup and ushered in the release of the 2006 concert/documentary Best Kept Secret. 2007 found Acoustic Alchemy collaborating with Higher Octave labelmates Down to the Bone for the album This Way. In 2011, they celebrated their 30th anniversary with the release of the album Roseland. The album peaked at number six on the jazz albums chart. A concert album, Live in London, appeared in 2014. In 2018, Acoustic Alchemy released 33 1/3 which again cracked the Top Ten of the Billboard Jazz Albums chart.
Read More
*Service and handling fees are added to the price of each ticket.
Get Tickets