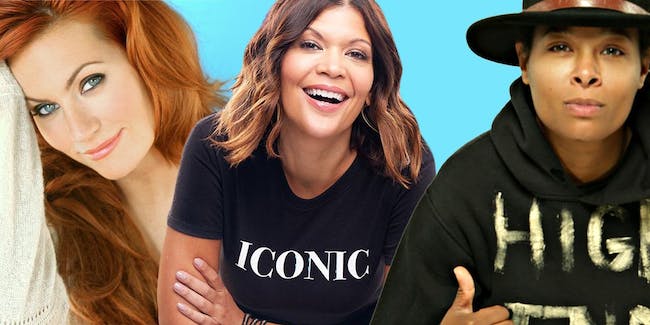 This concert was originally set to take place on 5/29/20. Tickets purchased for the originally scheduled show will be transferred to this new date and ticket holders will keep their same seats.

Aida Rodriguez is a new Afro-Latina, taking the world of entertainment by storm with her wit, strong performances, and charismatic personality. Making history as the first Latina to appear in two specials airing in one month on both HBO and Showtime, Rodriguez was handpicked by director Taylor Hackford for his film “The Comedian” starring Robert De Niro. In 2017, Coca Cola Global Women’s LINC Conference sponsored Rodriguez’s speech that modeled a TED Talk. Rodriguez has also appeared on Comedy Central’s The Nightly Show, five-time host of the PBS Imagen Awards, NBC's Last Comic Standing finals, TRUtv’s Laff Tracks, Fox Laughs, Nickelodeon Mom’s Night Out and Parental Discretion.

Aida Rodriguez wears many hats as comedian, actress, writer and mother. Sharing her point of view of the world, she writes comedy that is poignant and incisive. Her audiences often laugh hard, think hard, and feel hard as her comedy is cathartic and confrontational. Known as Funny Aida, Rodriguez aims to challenge the norms of today and the discomfort or taboo-quality around controversial topics like race, gender, sexuality, and family dynamics through her comedy. From the moment she takes the stage, the audience is engaged whether in laughter or in thought. Rodriguez’s comedy is not only medicine for the soul, but it may one day just change the world.

April Macie travels the world collecting stories and experiences, which she then translates into humorous, relatable tales in front of audiences worldwide. April was a finalist on NBC’s Last Comic Standing in 2006, has appeared on E! Entertainment, Sirius and XM Radio, Access Hollywood, Talk Soup, and HLN. April is a regular guest on the Howard Stern Show, where in 2008 she was voted the “Funniest and Hottest” comedian in America. She is also a regular guest on the Bob and Tom Radio Show and has toured with the Bob & Tom All-Stars. April has appeared on Showtime in the documentary, I Am Comic, Vegas Is My Oyster, Snoop Dogg’s: Bad Girls of Comedy, and recently was the host of the AVN Awards. April also recently appeared on Dave Attell's Comedy Underground on Comedy Central and Jenny McCarthy's Dirty Sexy Funny on A&E.  This summer, April’s Netflix special will be released as a part of Tiffany Haddish’s They Ready series. Currently, April spends most of her time traveling the United States as a headlining stand-up comedian.

Chaunte Wayans is a comedian, writer and actress who proudly represents the new generation of Wayans’ legacy making its mark in Hollywood. She was last seen in the film 50 Shades of Black, with other film and television credits including Hollywood Misconceptions, Dance Flick, TLC's Trading Spaces, Bounce TV's Off The Chain and Nicktoon's animated series, The Boo Crew. As a comedian, she has toured nationally wowing audience with her unique brand of comedy featuring for comedic veterans such as Katt Williams, Russell Peters, and her uncles Marlon, Shawn and Damon Wayans. Her comedic talent led her to become a featured cast member on MTV’s hit sketch comedy series Nick Cannon Presents: Wild N’ Out. Chaunte can also be seen on Katt Williams comedy special Kattpacalypse. Chaunte has showcased as a writer as part of CBS’ Diversity Showcase 2017. Recently she has featured on 50 Cents "50 Central" on Bet. Currently you can see her featuring on TruTV's "Laff Tracks."