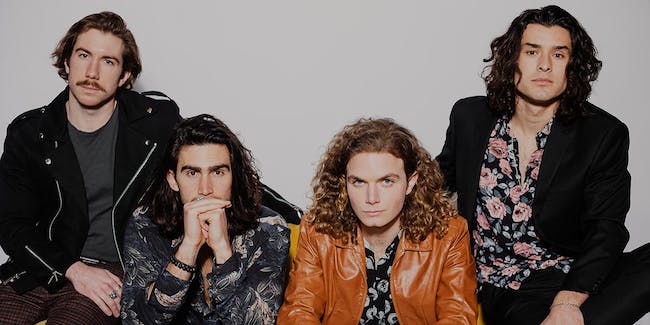 The Jacks w/ The Cuckoos **All Ages Matinee**

iCal
Google
The Jacks at Rams Head On Stage in Annapolis

This concert was originally set to take place on April 3rd, 2020 and was then moved to September 5th, 2020. Unfortunately we are still unable to open our venue due to COVID-19 so we have had to move this show yet again to Saturday, June 3rd, 2021 @ 1pm. Tickets purchased for the originally scheduled show will be transferred to this new date. Please call (410) 268-4545 with any questions. Our box office is open on Tuesdays, Wednesdays and Thursdays between 9am - 2pm.

When it comes to playing rock & roll, The Jacks simply don't have a choice. "It's what we listen to, it's what we play," bassist Scott Stone says, "and when you stick four guys like us in a garage with instruments, it's just the kind of music we are going to make."

The group has recorded their first EP with producer Matt Wallace (Maroon 5, Faith No More) at Los Angeles' famed Sunset Sound Recorders. But even though they've been playing together for only a couple of years, rock has been The Jacks' lifeblood for as long as they can remember.

As Wallace declares, “The Jacks deliver up lean, rugged rock & roll with songs that feel like instant classics that make you want to move, with earworm hooks and melodies that will have you kinda upset when you find yourself unintentionally and inappropriately humming their songs at work, in church, in court, or at wakes. If the The Strokes, Cage The Elephant, and The Rolling Stones had an equally talented, but more handsome baby, it would be named The Jacks!”

They've spent much of the last year on the road all over the U.S. including a slot on the Sonic Temple festival, playing alongside Foo Fighters, The Hives, The Struts, and many others.

"There isn't an end goal for us, we just want to continue to write the music we love, share it with as many people as possible, and hopefully be remembered for it," Hunter says. "We hope that we can one day inspire other musicians to do the same. Oh ... and we want to sell out Wembley."

The bittersweet incandescent shimmer of The Cuckoos is deeply rooted in classic rock, dance club funk, and neo-psych art soul, earning the young Austin, Texas band a remarkable reputation in just a few short years. The swampy groove arising from the collision of New Wave romanticism, swirling experimentalism, and loud punky guitars is somehow as perfect as it was improbable, decisively demonstrated on record and stage.

I Hate Love, the band’s debut album, is a musical manifesto. The diverse ten-song outing crackles with the electricity of The Cuckoos coming into their own. It’s all a result of the combustible chemistry between Kenneth Frost, Dave North, Eric Ross, and Cole Koenning developed in New York, California, Mexico, the UK, and of course, the Lone Star State.

The band’s first self-titled EP earned favorable comparisons to Tame Impala, Joy Division, and Pink Floyd, from esteemed publications like Classic Rock Magazine and Relix. I Hate Love is rooted in their primal psych-rock post-punk soul but broadens its scope. It’s a new signature sound, one that will appeal equally to folks weaned on essential art-rock like Talking Heads and those attracted to retro-future acts like Uncle Acid and the Deadbeats.