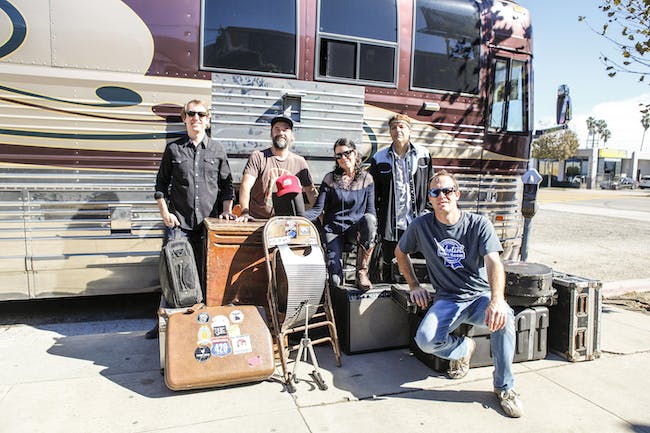 This concert was originally set to take place on April 2, 2020. Tickets purchased for the originally scheduled show will be transferred to this new date and ticket holders will keep their same seats.

Donna The Buffalo is not just a band, rather one might say that Donna The Buffalo has become a lifestyle for its members and audiences. The band has played thousands of shows and countless festivals including Bonnaroo, Newport Folk Festival, Telluride, Austin City Limits Festival, Merle Fest, and Philadelphia Folk Festival. At several festivals Donna The Buffalo has become the house band for closing the events by backing up artists including The Avett Brothers, Keller Williams, Zac Brown, Bela Fleck, John Paul Jones, and Chris Thile. They’ve opened for The Dead and have toured with Peter Rowan, Del McCoury, Los Lobos, Little Feat, Jim Lauderdale, Rusted Root, and Railroad Earth to name a few. They also toured with Ben & Jerry’s co-founder Ben Cohen to help raise awareness about increased corporate spending in politics. In 1991, the band started the Finger Lakes Grassroots Festival in Trumansburg, NY. The four day festival has become an annual destination for over 15,000 music lovers every year and was started as an AIDS benefit. It continues as a benefit for arts and education. To date, the event has raised hundreds of thousands of dollars and is now one of three Grassroots Festivals; the Bi-annual Shakori Hills fest in North Carolina and Virginia Key festival in Florida. In 2016 GrassRoots Culture Camp was introduced in Trumansburg, New York as four days of music, art, dance and movement workshops, including nightly dinners and dances.

The most loyal fans in the Herd are always eager to accept a call to action. Last year Donna the Buffalo started a crowdfunding campaign to buy a new tour bus; within three weeks, they had raised $90,000. “You can imagine how validating that felt for us,” Nevins says, still overwhelmed at the generosity.

By creating a bridge between generations, Donna the Buffalo attracts one of the broadest demographics on the festival circuit. When Nevins encounters young women in the autograph line, she likes to write “Girl Power!” She’s proud to see them looking up at the stage and watching a female musician really getting down, comprehending that they could do the same thing one day. In addition, Puryear has noted that Vietnam veterans have gravitated to the band. During a songwriting workshop, Puryear sang “Killing A Man,” which examines the complicated psychological ramifications of ending another person’s life. He felt uncertain about recording it, he says, until a veteran came up and asked him how he got those emotions exactly right.

Dance In The Street closes with “I Believe,” a song with a message of support. From the stage, Nevins often hears men and women singing it with her. “I think our message is encouraging. It’s something for people to latch onto,” she says. “And what an awesome sound and feeling to hear an audience en masse singing your song with you.”

Donna the Buffalo draws on a lot of musical influences, from country and rock ‘n’ roll, to bluegrass and old-time fiddle, as well as Cajun and Zydeco. In many ways, they were Americana before the term was ever coined. The common thread? Songs of the human spirit, and an incredibly tight relationship with their fans.